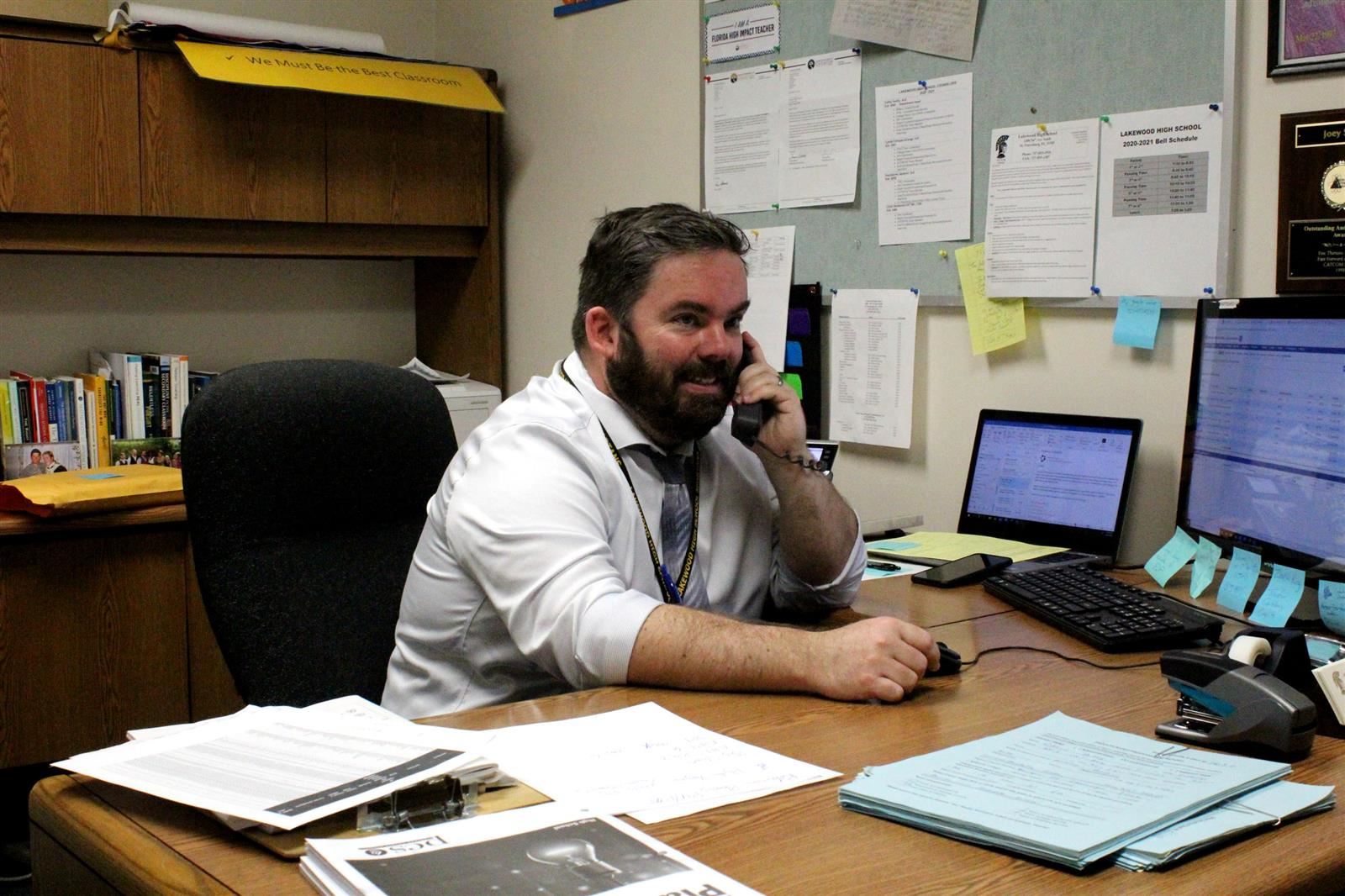 When Joseph Serra III left Lakewood as an alumnus in 1998, he didn’t expect to be back here 22 years later. Now as the assistant principal of curriculum, he is one of the key people who helps to keep the school running.

Serra started on July 20 and said working at Lakewood isn’t exactly what he expected it would be. When he signed up for the position, the coronavirus wasn’t a thought in his mind. But now, it’s more than impacted the way he does his work.

“It’s hard to say I love it, because I don’t think anyone can love working in a pandemic … but as far as interacting with the teachers and the staff, I’ve absolutely loved my time,” Serra said.

Serra spent the last 18 years teaching math, the first nine years in Oakland, Ca., then another nine as a math coach at Boca Ciega High School in Pinellas County.

“I love math. I had to. I still have my favorite math books in my office. I’m a super huge math nerd at heart,” Serra said.

But after 18 years, he decided he wanted something different and made the decision to apply to assistant principal jobs in the area. While Lakewood was his first choice, he wasn’t sure if there would be a spot for him. When assistant principal Susan Alvaro left, it provided him the opportunity to work at his former high school.

“I’m grateful for all the work that she did even though it set high expectations for me. It would be a lot harder to start this job if things weren’t set up well by the person that had this office before me,” Serra said.

A lot has changed in the 22 years since he graduated from the Center for Advanced Technologies at Lakewood. The students, faculty and teachers have changed, with the exception of his computer science teacher Robert Tencza.

“The only person that is here from when I was a student is Mr. Tencza. (He) was my computer science teacher in 1994, I think. He was super friendly when he found out I had been hired. It’s been really neat to work with him,” Serra said.

While it’s not the same school it was then, he says the most surprising thing is the growth of the football team and its size. Having played on the junior varsity team, he’s not sure he would be able to keep up now.

“I don’t know if I could hang on the football team nowadays. It is a big operation here, and it definitely wasn’t as big of an operation when I played football,” Serra said.

Even though he’s new to the administration at Lakewood, he has big ideas for ways to move forward. This includes bringing more advanced placement and dual enrollment classes to the school and building a “college culture” within Lakewood to help move students toward success.

“One of the things I’m excited about is working with (principal Erin) Savage and with teachers on preparing all students for college and looking at ways to challenge our students so that they’re prepared when they get there,” Serra said.

While these are great goals, the start of this year hasn’t been easy, and he wishes he had more hours in the day to work, though he said he stays until 5 p.m. to get things done. While he comes to work every day with a to-do list in hand, many of those things don’t happen during his working hours with so many kids to look after and problems to solve.

“The way I think about it is, student needs while students are in the building, that comes first. … So, making sure that all of the students are where they need to be, and supported and safe, all that work comes before anything on my to-do list,” Serra said.

Being an assistant principal is about being able to connect with students and understand what they need, but because of the coronavirus, making that connection has been much harder, and when you throw in being new to a school, it has proved difficult. Serra said that because of this he’s missing a connection with his students that he’s used to having.

“I miss being able to shake a student’s hand. And that’s a really little thing, but it’s really important. And I found myself seriously every day having to stop myself from wanting to pat someone on the shoulder or shake their hand, and just those ways that we show people that we care about them,” he said. “I look forward to doing that.”