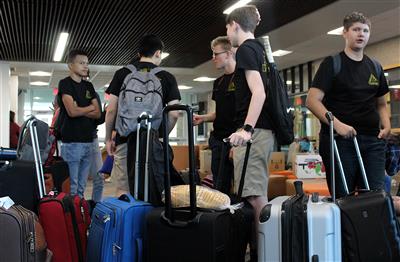 COVID-19, also known as Coronavirus, is the talk of the world, international news organizations like CNN and MSNBC running nonstop coverage of the outbreak.

Originally detected in Wuhan, China in December 2019, the outbreak has since swept across Europe and has lately begun seeping into America, prompting President Donald Trump to announce a 30-day travel ban on Europe on Wednesday.

The effects of COVID-19 have been felt more locally as well. With two confirmed cases within Pinellas County, the virus is on the mind of nearly everyone at Lakewood High School.

This has prompted numerous cancelations of events, most notably the calling off of the Future Business Leaders of America State Leadership Conference that was to be held Thursday through Sunday in Orlando.

The conference was cancelled on Thursday (3/15), the day students were set to leave. Sophomore Emma Ash was one of the students set to compete in the events at the conference.

“Five minutes before the bus came, they were like ‘just kidding’,” Ash said. “It bummed me out because I wanted to compete.”

Ash, along with many other people, paid a total of $275 to attend this conference. Students and teachers are unaware of what is going to happen going forward – whether it will be rescheduled or whether they will be reimbursed - and are waiting on officials to release more information.

Similarly, the Key Club District Education and Leadership Conference was also cancelled on Thursday due to Coronavirus concerns. The conference was planned to begin April 2 and last three days, but the Florida District of Key Club International suspended the event until further notice.

Chemistry teacher Jennifer Pacowta, an organizer of Lakewood’s Key Club, was also caught off guard by the news.

Conference attendees had to pay a total of $235 to attend the event. The District Administrator of the Florida District of Key Club International said that everyone will receive partial refunds in four to six weeks

In another case of cancelation, the track team meet in Osceola High School in Kissimmee scheduled for this Saturday has been canceled in response to the swift spreading of the virus. Junior Lezion Coleman was planning on attending the track meet.

“I feel like it’s stupid,” Coleman said, “but I can completely understand why they did it with the whole outbreak.”

With the closing of the Universal Studios theme park, the status of the much-anticipated event GradBash has been called into question. With the event costing students $115, many are wondering if their money has been wasted. Assistant Principal Susan Alvaro does not have answers.

Another loss due to the rising fears around Coronavirus was the Center for Journalism and Multimedia (CJAM) Banquet. The event was hosted at USF St. Pete in years past, but they’ve shut down their campus, forcing Lakewood’s CJAM program to consider alternatives.

“It’s disappointing, but we are going try to get an event together later on this year and hold it here at the school so we can have our award ceremony,” journalism teacher Kathleen Tobin said.

While officials are worried and events are cancelled left and right, the students and teachers of Lakewood are mixed in their reactions.

“I’m worried,” Alvaro said. “But I’m not panicked by most others.”

While some students wear face masks and take drastic measure to avoid infection, freshman Kaleb Clayton is hardly too concerned.

“I’ll just be staying clean, duh?” Clayton said. “It just like getting the flu.”

School events are not the only thing postponed or outright cancelled in the wake of the rapidly spreading infection, many plans for spring break and beyond have been put into question.

“The only plan that might change is that I bought tickets to Europe this summer,” Alvaro said, “So I don’t know if I’ll be going if flights will still be restricted by then.”

Staff and students are also worried that school itself could be shut down. Lakewood principal Erin Savage said she is hoping for the best but prepared for the worst.

“If a student in Pinellas County gets infected, the school they go to will close, not the entire district,” Savage said. “If we do close, we are preparing to do online courses. I do not think we will have to do make-up days.”

A concern among parents and students is that of the school provided breakfast and lunches, given the number of students that rely on the Pinellas County School system for food. Savage understands concerns, but cannot say anything definitive just yet.

“I am not sure how they will be affected,” Savage said. “The school may open the cafeteria for those students, but I am not sure.”

Pinellas County Schools superintendent Michael Grego released a statement on Thursday, informing students, staff and parents on the status of the schools in the face of the coming outbreak.

“We’ve intensified the daily cleaning and disinfecting of all our classrooms, facilities and school buses,” Grego said. “Principals, teachers, nurses have all been educating our students on the importance of good hygiene such as washing your hands with soap and water for 20 seconds, using hand sanitizer, coughing into your elbows or a tissue instead of our hands and staying home if we aren’t feeling well or we have a fever.”

Grego said he think everyone should “continue following… preventative measures during the next week and be cautious when traveling and interacting with people during the spring break, and please adhere to the advisories regarding travel in high risk areas determined by the Center for Disease Control.”