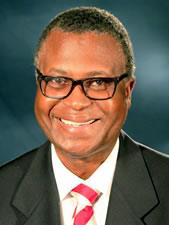 As Minority Achievement Officer, Dr. Lewis Brinson is responsible for planning, coordinating and implementing initiatives to close all achievement gaps. He works with district administrators and principals to ensure there are adequate resources and support to accomplish this goal.

Dr. Brinson is a 40-year educator, who previously held the position of Chief Diversity Officer of the Hillsborough County School District. He served as Assistant Superintendent for Administration for 10 years and as an Area Leadership Director for two years. He also served as a teacher, assistant principal and principal at several Hillsborough County schools, where he was named Teacher of the Year at Eisenhower Middle School and Principal of the Year at Benito Middle School. He also initiated the first barber mentoring program with the district.

Dr. Brinson earned his doctorate degree in education from Argosy University. His dissertation was based on the voices of boys in alternative school and their perception of their future.

He traveled the country with the National SAM Innovation Project, training principals on the importance of managing their time.

He is involved in the Florida Association of School Administrators, Hillsborough Alliance of Black School Educators and Leadership Tampa Bay.

He co-founded the Riverfront Summer Basketball League, and he founded Educators For Change. He initiated the Save The Children campaign in response to the mysterious killings of more than 20 African American children in the 1980s. He is responsible for the first Black History display at the Florida State Fair in 2016.

Dr. Brinson was born in Monticello, Florida, and raised in Tampa, where he played junior and senior varsity basketball. He is married and has three children.