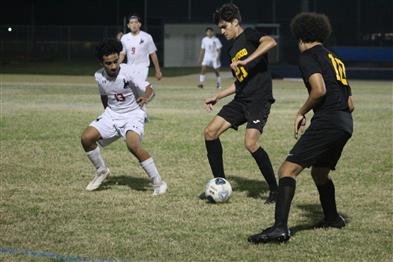 Senior George Nikolaev stops the ball as he tries to maneuver it away from an opposing player on Feb. 17 at Hollins High School. The Lakewood boys' soccer team beat LaBelle High School 2-0 at quarter regionals. (EMMA COLLINS | SNN)

With a district title in the bag and a victory in the regionals, the boys’ soccer team heads to Cape Coral on Saturday (2/20) to play state champion runner-up Mariner High School.

The boys’ team this year has been sensational all season, with an overall 17-3 record and a 10-0 home record.

“I think we are built to take down any team coming for us; we got this,” said senior Robert Shedden.

After a big victory to win districts, the soccer team went on to win 2-0 Wednesday in their first regional game of the year, against LaBelle High School.

“We used our advantage of taller players. We just never felt we were going to lose. It was a relatively routine win,” said head coach Brandon Vaughan.

On Tuesday, Feb. 9, the team defeated Dunedin with a goal in the last quarter. That victory won them their first district title in 16 years and allowed them to move on to the next round of the playoffs.

Sophomore Salvador Jean hit the game-winning shot, with the final score of 1-0.

“It was a lot of pressure, but it was great. It made me feel like a champ,” Jean said.

When Vaughan was asked who made the biggest impact on the game, he was pretty sure of himself.

“Salvador scored the game winner. I have to go with him,” Vaughan said.

Vaughan said he was excited and focused for the team’s future and goals.

“To get them back in for the next game, sending the seniors out with accomplishments and this year’s highs and lows are what I’m focused on,” Vaughan said.

With a great season come challenges, and the soccer team has faced a couple, but they have been able to stay afloat.

“Staying healthy, staying in shape, having enough numbers, and being able to keep pushing have been the biggest challenges,” Vaughan said.

Jean said this team is on to greater heights.

“I think we play as a team very well and have the same mindset with an excellent coach who knows what he’s doing,” Jean said.

Now, with two big wins under their belt, they move on to face Mariner High School, which will arguably be their toughest challenge yet. The game is Saturday at 7 p.m. in Cape Coral. If they win, they move on to the regional final on Tuesday night and a win there will take them to the state semifinals on Feb. 26.