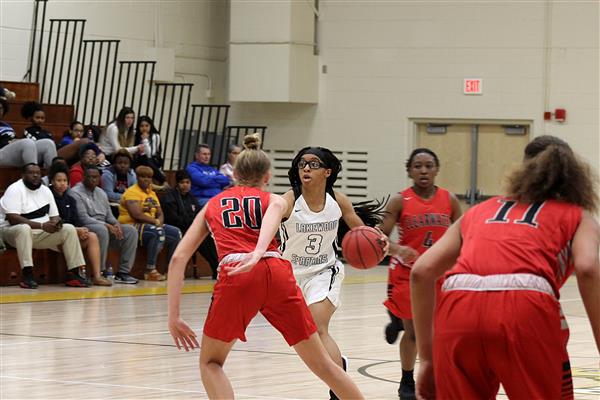 Freshman A’shiya Youngblood, a shooting guard for the Lady Spartans, tries to get away from a defender during a game against Clearwater High School on Jan. 31 in the Lakewood gym. (INAGE COATES|SNN)

The girls’ basketball team is about to advance in the district tournament. On Monday night they beat Sarasota Military Academy, and tonight they play the Academy of the Holy Names at 7 p.m. in the Lakewood gym.

The Lady Spartans have been playing with predominantly underclassmen, and with such a young team the Spartans have experienced growing pains this season. So far, the team is 10-13, with some losses against tough competition.

But head coach Necole Tunsil said she is proud of her young team fighting through adversity.

“I feel like we’ve come a mighty long way. I’m proud of this young team. The team has been playing with three freshmen and six sophomores, and since our senior center, Macey Zeh-Arndt, has been down with injuries there have been a total of three upperclassmen on the team, so this young team has been carrying us and learning valuable lessons,” Tunsil said.

Junior guard Nylah Coleman said she has high hopes for the playoffs and is proud of the progression of the team.

“I feel like we can make it to states because we’re getting better every game and we’re working hard every day,” Coleman said.

Joshaunte Thomas was the lone senior while Zeh-Arndt was down with an injury. She said she is pleased with the development of the team and is impressed by the team’s toughness.

“I’m proud of my teammates for fighting through adversity and developing while having fun doing it,” Thomas said.

It was difficult for Zeh-Arndt to watch her teammates play while she was injured, but she’s back now.

“It was hard watch my team play knowing I could help but I’m back now and looking forward to the rest of the season,” Zeh-Arndt said.

The Spartans have no problem with beating up on teams in Pinellas County with dominating wins against, Pinellas Park (66-26), Boca Ciega (73-17) Northeast (55-38), Dixie Hollins (68-18) and St. Petersburg High School (71-44). But when they go to tournaments away from the county and play better competition, they’ve gotten beat.

The girls beat Sarasota Military Academy Monday, 104-8, in the first round of the district tournament. Now they face Academy of Holy Names tonight @7 p.m at home.

“You always suit up to win a state championship and anything under that is a bust, because here at Lakewood, we have a tradition of winning,” Tunsil said.