Here’s how the virus has affected Lakewood High 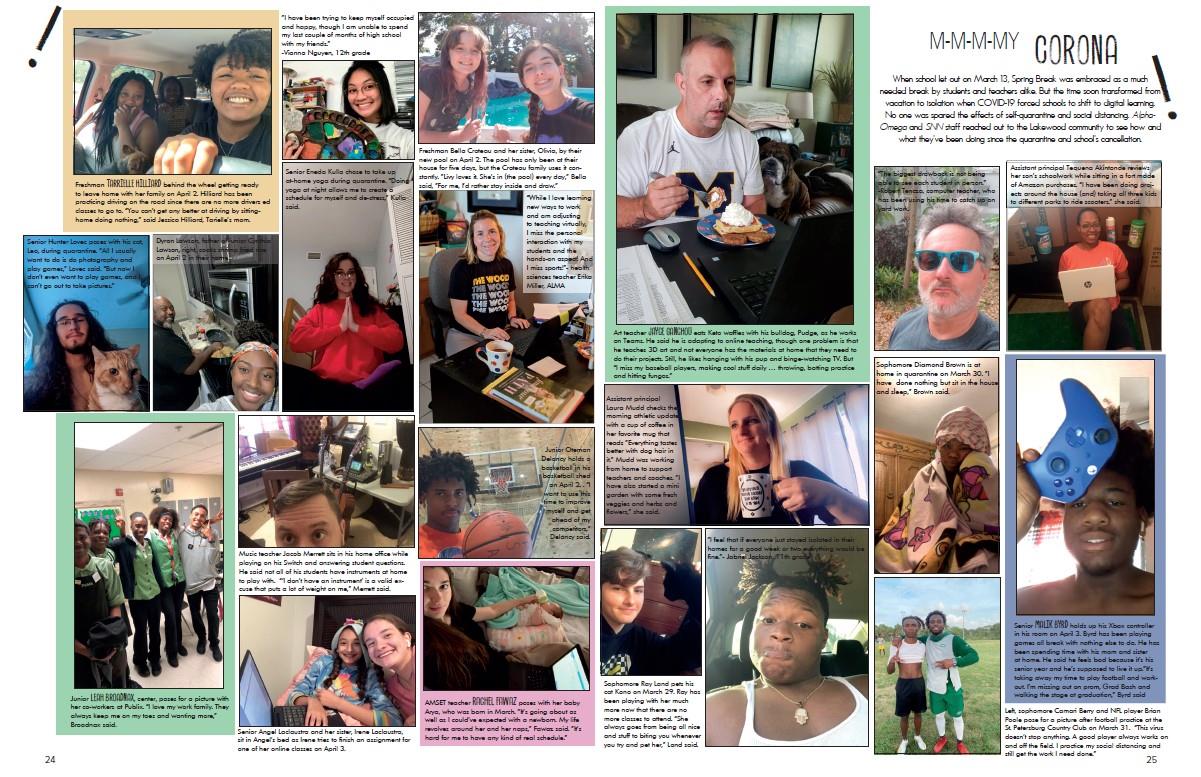 For one of their online learning assignments, Center for Journalism and Multimedia
students sent in selfies and captions portraying life in quarantine. The photos and
captions were made into a spread for the Alpha-Omega yearbook.

Covid-19, better known as the coronavirus, has played a huge hand in disrupting everyday lives and routines. The virus, which started in China, first hit the United States on Jan. 20, and since then any sense of normalcy has come to a screeching halt due to fears of contracting the disease and the need to quarantine.

Now, while most of America is self-isolating at home, SNN takes a look at how this pandemic has affected the lives of Lakewood’s student body and teachers.

Many dramatic changes have been made in order to continue education and learning. “Online school” is one of them. Beginning on March 30, Lakewood High School students started lessons through the platform Microsoft Teams. This allows students and teachers to communicate and learn together while staying home.

“Going from the traditional brick and mortar building to digital learning has been harder for some more than others. Some students and adults rely on the camaraderie and socialization that they receive at school,” Lakewood principal Erin Savage said.

Many have been working hard to make the transition as smooth as possible. Still, challenges with the platform and its mechanics have come up and made it difficult for students to adjust. The program had required some tweaking, but despite the difficulties, people in the community have come together to help students in this time of need.

“There’s always room for growth in learning, but I think we are all figuring out this digital learning thing one day at a time,” Savage said.

District leaders have organized available resources for students, including distributing laptops, offering free Wi-Fi from Spectrum, and even handing out daily lunch and breakfast.

While school closing has been difficult for many, it is especially sad for those who are about to graduate.

Senior Shemar Dean said he misses his friends and said being out of school with such a tentative return date is taking away from his last year in high school and the experiences that go along with it.

“I’m not really happy anything is cancelled, because this is the year everyone looks forward to,” Dean said.

Graduation, in particular, is a major milestone that he doesn’t want to miss.

“I’ve always dreamed of walking across that stage in front of my parents and friends knowing we did it together,” Dean said. “I believe it’s only fair that they reschedule it for some time that this virus is over because it’s every kid’s dream to get that diploma and feel that sense of accomplishment, and I just don’t think online would do it justice.”

Sophomore Emma Ash was set to star in this year’s musical, Legally Blonde, but the excitement she had felt about being in a lead role was crushed by the school closure and the show’s cancellation.

“Thespians is my creative outlet,” Ash said. “I really have nothing to do except school.”

Not able to practice or participate in Drama Club, she said she is bored so has been doing other household activities to stay busy. “I’ve been cooking a lot and baking,” Ash said.

She said she has immersed herself in online school and is trying to make the best of it. “I get to do things on my own time,” Ash said.

Ash’s 16th birthday party, which is in April, had to be cancelled. She says that while this is disappointing, she understands why it had to be done.

“I can’t wait to go outside and see my friends,” Ash said. “I haven’t talked to anyone face to face that’s not my mom in a hot minute.”

Teachers’ lives have also been changed. While still considered essential workers, all their work must be done from home.

For some it has its benefits. Science teacher Rachel Fawaz said working at home has made it easier for her because she has a newborn daughter, Arya.

“I can take care of my daughter myself instead of getting sitters,” she said “(But) it has made it harder because I can't be there in person to show students how to do things or explain subjects to them.”

Beyond online learning, Fawaz, who is head of the environmental science program at Lakewood, said she is concerned about the tanks of fish the students care for that had to be left behind when school was closed. She is not sure what will happen to them, she said.

“Letting go of the wild fish (into the lake in the Outdoor Classroom) is no problem. Letting the other fish go would be a very bad idea. They would either die, which is a shame because they are beautiful fish that students raised or they become an invasive species,” she said.

Online learning has also been difficult for teachers who teach subjects like art and music. Both subjects are very hands-on, so a new method and style of learning has had to be developed for both students and teachers.

Three-D art teacher and baseball coach Jayce Ganchou said he has had to adapt the work and his method of teaching.

“It’s not my style at all,” Ganchou said. “I like being around the kids, interaction, the tools, the materials, making cool stuff and problem solving.”

Ganchou said one of his biggest challenges is finding art projects that everyone can do with materials they have at home. While one student may have the materials they need to complete a project, another might not.

“Now I just have to create lessons out of what everyone would have at home and can do pretty much on their own,” he said.

Aside from creating projects, he said his other big challenge is getting attendance done.

“Back and forth check-ins for attendance (is difficult) because the students are logging in at different times,” Ganchou said.

However, he said, some things have been easier regarding the transition - including getting up later and not having to manage clean up.

“(I) don’t have to shave every day. Nap time is whenever I want it. I don’t have to walk around and complain about kids that don’t clean up or put tools away,” Ganchou said. “(I’ve had) more free time…working out, ‘quaren-tanning’ while getting some yard work done and just chilling on the patio.”

He said he misses his students and the interaction they have and, although they can be frustrating and annoying, being around them is fun and entertaining.

“I refuse to grow up, and being around the kids helps that,” he said.

Ganchou also coaches Lakewood’s baseball team, and he regrets that the season had to end so shortly. “I miss my baseball team and practicing and the games,” he said.

The Florida High School Athletic Association has a potential plan if school resumes that could extend a short sports season into June, he said.

“I’ll take anything at this point, but it’s all based on how this all starts to wind down and will it be safe to get back at it,” Ganchou said.

Music teacher Jacob Merrett said he has also had some challenges regarding online school and the way it has affected his teaching.

“(It’s) definitely more challenging to make a change and get going, and students without instruments are almost impossible to teach the way I am used to,” he said.

He said teaching from home is easier in some ways, but without the students it’s just not the same.

“It is very convenient, but it is disheartening to not see students in person. … If I wanted to be an online teacher, I definitely could have done that, but I want to interact with students face to face,” Merritt said.

While things have been confusing for everyone, transitioning to this new way of learning has shown how flexible students can be.

Merrett said the thing he is looking forward to when school resumes is “making music in a group, instead of whatever this is.”

Many are holding out hope that school will resume on May 1, along with the scheduled senior activities like Grad Bash, graduation and prom. If so, then Lakewood’s other regularly scheduled activities will also resume.

“My pinkies are crossed that we return to school in early May and resume activities. As I receive additional information, I will make sure I get it out to staff and families,” principal Savage said.

Even if school starts again, health and safety concerns will not go away as guidelines are in place to keep the schools clean and reduce the possibilities of contamination, she said.

“This is a temporary situation, so let’s all work really hard to keep the momentum going for these next few weeks... I’m crossing all of my fingers and hoping that we can return before the end of the year. Until then, please stay safe,” Savage said.