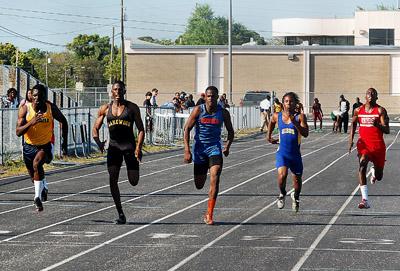 Finishing strong is what lakewood does best

By BRIANNA JOHNSON and BASIL ROLLE

The boys tracks team placed first in districts on April 20, while the girls placed second.

This came a week after the girls placed first in the PCAC track meet on April 14, even though senior Kala Funderburk – one of the team’s top runners - had an anxiety attack and left the track meet after finishing only half of her events.

In the PCAC meet, she said she ran her fastest time in the 4x8 (2:14) and she thinks her body “went into shock.” An ambulance came and gave her an IV and then her dad took her home.

Funderburk is the number one runner in the county and possibly the state, said Snead.

Also in districts and PCAC, sophomore Sharell Keys took first in the 100-meter dash and the 200-meter dash.

The boys placed second in the PCAC competition, with a huge surprise from senior Xavier Harrison.

“(He had been) up and down all season and hadn’t won many events,” said Snead. “(He) seemed to explode on the scene.”

Senior Dennis Pugh took first in the 110-meter hurdles and the 300 hurdles.