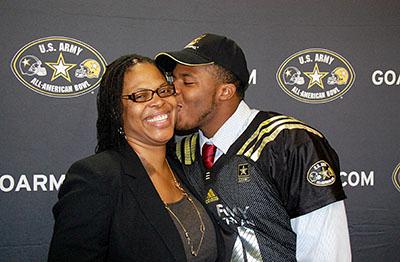 Lakewood football coach Cory Moore said Wynn “exemplifies a lot of things we are trying to achieve at Lakewood. “

“He does everything the right way, definitely exemplifies what Lakewood stands for and is one good student in the classroom,” he said.

Army Sgt. Inja Gordon, who attended the ceremony, said she was very proud of Wynn. “In the past years, we’ve had plenty of nominees. This year he set the rank. … He’s a wonderful young man. He’ll go very far in life,” she said.

Not only were representatives from the Army there, the Soul of the South marching band, cheerleaders, principal Bob Vicari, assistant principals Ste’Phan Lane, Harriet Davis, Susan Alvaro and most of the football team were also in attendance to congratulate Wynn.

But most importantly his family got to celebrate with him.

Isaiah Wynn will attend University of Georgia after graduation on a football scholarship.

“All things are possible if you stay focused as a student athlete and never forget where you came from,” Moore said. 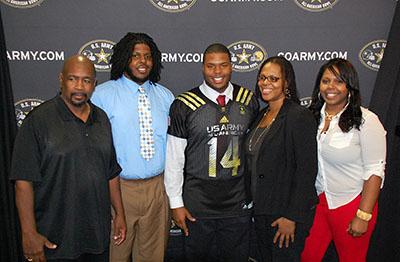 Senior Isaiah Wynn (center) stands with his stepfamily father Otis Keels (left to right), brother Aram Wynn, mother Beulah Wynn and sister Illenan Wynn at the US Army All American Bowl ceremony on Nov. 1. Wynn was presented with a jersey and hat during the ceremony. 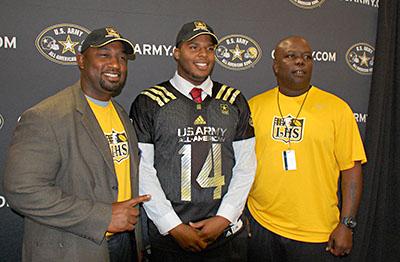