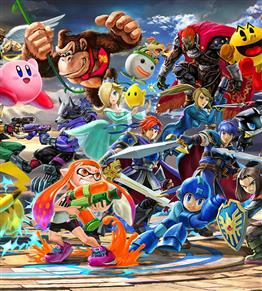 Let’s talk about the Smash Ultimate and Melee tournament held in the school library on Oct. 18 – one of the best after-school events that Lakewood has hosted in the four years that I’ve been here.

About 30 people were playing games together and having a fun afternoon. Students competed and as the bracket thinned, excited crowds grew to watch the match unfold.

Esports, shorthand for competitive videogames, have found a home at Lakewood High School in the Esports Club. A number of games are represented by the club, from Smash Ultimate to Rainbow 6: Siege, each game having a global competitive scene.

Tournaments or other competitive events for these games are held all around the world, some on a weekly basis, others an annual event. And to see this happening at my school was great.

With over 40 people signing up, the tournament was a huge success, as was last year’s Smash Ultimate tournament. If there were tournaments for the other games the Esports Club hosts, I have no doubt those would be a raving success as well. I believe it’s in Lakewood’s best interest to sponsor and evolve the Lakewood High Esports scene, and here’s why.

It’s no secret that the students of Lakewood lack school spirit. It’s hard to admit, but it’s the truth. However, by sponsoring regular events for the esports communities of Lakewood, something of a community could be formed around them. Students will be excited to go to school, so they can prove themselves at a competition on a regular basis. Additionally, charging an entrance fee or selling snacks could also bring in a good amount of money to other organizations at Lakewood, such as the Key Club.

All in all, more regular, school sponsored tournaments would be beneficial to the school itself, helping raise school spirit and, likely, some money.