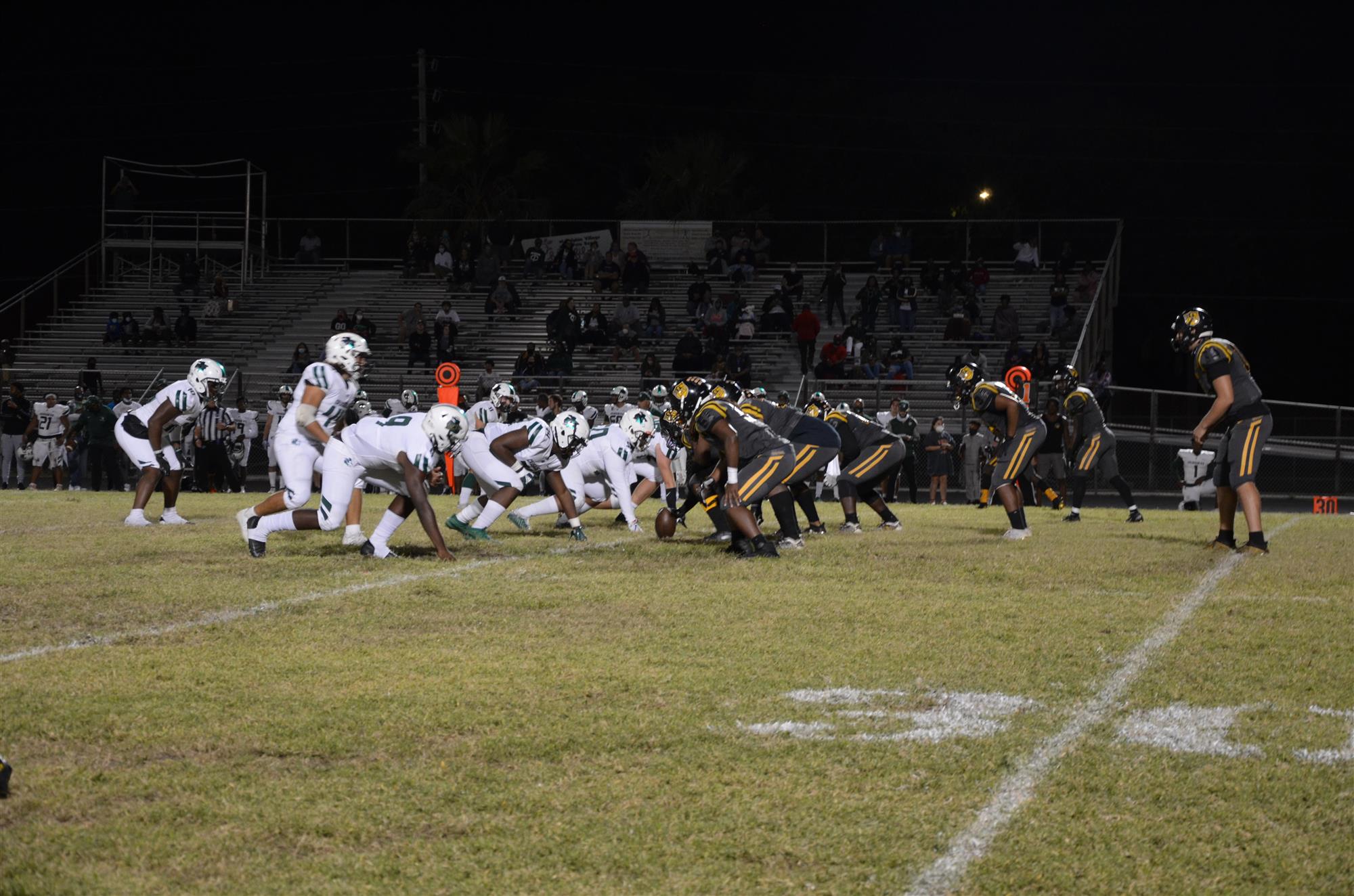 Lakewood's defensive line faces off with Tampa Catholic during a playoff game on Nov. 20 at Lakewood. The Spartans lost to Tampa Catholic 17-14, their first loss of the season. (DESTINI GONZALEZ | SNN)

The first three quarters were dismal for the Spartans. Their offense sputtered, going three and out four times. They had a small drive on the fifth, only to be disrupted by time limit.

The defense wasn’t much better, as their line could not stop the Tampa Catholic running game, which amounted to about five yards per carry. Tampa Catholic wasn’t doing much either, as they completed more passes to Lakewood than they did to themselves: They had one completed pass, but the Spartans had two interceptions. Special teams weren’t doing well either, an extra point and a punt were blocked.

Tampa Catholic drove right down the field their first drive on an interception from the first throw from Lakewood ending in a QB sneak to make it 7-0 at the end of the first.

In the second, the blocked punt turned into an immediate touchdown, and Lakewood started to drive, but they were interrupted by halftime. Tampa Catholic heavily trusted their running game and nothing else, as they missed two field goals. Going into halftime, the score was 14-0, Tampa Catholic.

After the half came a change in the quarterback position, as starting senior Jack Smitherman was replaced by junior Lutarus Adams. This completely changed the offense from passing to running.

Adams, on every snap, tucked the ball, hesitated for a gap in the defense line, and drove right through. This effort was also helped by senior Artez Hooker, who rushed just like Adams. The Spartans improved in the third quarter as the defense made many key stops to send Tampa Catholic to the bench.

As the Spartans took the field in the fourth quarter, all hope seemed lost, and then Lakewood started its comeback. The Spartans stayed with the running offense, and after a stop by the defense, they marched right down the field, ending with a touchdown by Hooker to make the game 14-6.

The extra point was blocked, but it all worked out, as the Spartans intercepted a pass, scored an extra touchdown and successfully went for two points. The score was now 14-14.

A penalty by Tampa Catholic moved the Spartans up to the one-yard line, and the team chose to kick a field goal. However, the attempt was blocked by the Crusaders, and the clock ran out causing overtime.

Tampa Catholic began overtime with the ball, but the defense clutched up and caught an interception in the end zone. Lakewood then went back to the running offense, and Hooker ran to the one-yard line from the 10.

However, this was moved back by a penalty and Tampa Catholic made the fourth-down stop as Smitherman, who was back in the game, tried to rush in the end zone, but was prevented.

The Crusaders then ran onto the field celebrating what they thought was a “victory,” while the Lakewood players watched in disbelief. The refs were not having this. They quickly called an unsportsmanlike conduct penalty and Tampa Catholic was moved back 15 yards.

But in the end, the Crusaders made the field goal again and won the game.

This was a disappointing loss for the fans, the coaches and especially the players. They were crushed by the defeat, and everyone in the stadium, besides Tampa Catholic, felt for every single player out there.

Head coach Cory Moore said he was frustrated with the game, but he kept his cool and had a very mature view of the game.

“Games like these are ammunition and motivation for the games to come,” he said.