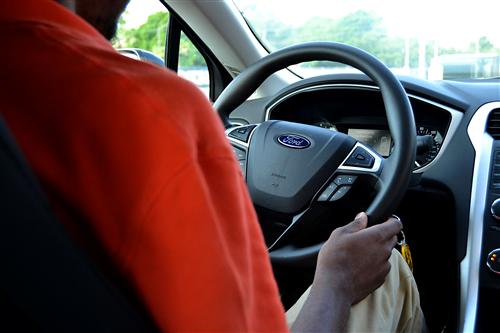 Driver’s education teacher Victor Williams said a lot of kids don’t want
to study the handbook because it is a lot of reading. “That stops a lot of
them from getting their operator’s (license),” he said. (BIANCA COLLINS | SNN)
BY SANJULO KING AND BRIANNA WALKER
SNN Staff Writers

A 17-year-old Lakewood student said her brother taught her how to drive when she was just 10 years old. Before she got her license, she said she used to drive without an adult all the time.
“I always thought that driving alone without my license was okay, because I had places to be and things to do,” she said.
Another student, a junior, said he taught himself to drive at the age of 14. He currently has his permit, and has to wait a year before
he gets his license, but he also drives without an adult all the time, he said.
“If a cop pulls me over, I’m turning white. I swear to God, I’m turning white,” he said.
These two students are not the only ones who think this way. SNN surveyed 216 Lakewood students in April. Seventy percent of
those students did not have a legal driver’s license. Of that 70 percent, 42 students - or 27 percent - said they sometimes drive without a legal person in the car with them. And 15 percent said they drive every day without a legal driver in the car.
“Am I surprised? No, I’m not surprised,” driver’s education teacher Victor Williams said about the survey results.
“If anything happens like an accident, the parent would be responsible. There’s a huge consequence like jail time. … It’s going to happen. (You’ve) just got to try to keep coaching them to do the right thing. You want to be with someone 20 years of age with the proper license and get your learning experience by that.”
School Resource Officer Lerric Boyd said the survey results are “disturbing” because driving when you don’t have enough experience can cause accidents.
“A lot of young people lose privileges and you get a ticket at 16 if you get pulled over,” he said. “They start putting points on your license and it’s unsafe.”
Williams said his class during the school year usually has about 15 to 20 kids, but over the summer he said he has at least 150 kids.
The students have to be at least 15 years old to be in the class.
For the first two weeks of the class during the school year, the students do the drug and alcohol course. If students take the drug and alcohol course at home online, it would cost $30, but if it is done in school, it is free.
The next two weeks the students will be working for their learner’s permit, and once they get their permit, Williams said he puts them in a car on the driving range or takes them on the road. The permit costs $48, and the actual driver’s license at the Department of Motor Vehicles costs $48.
Williams said he is aware that a lot of teens are driving alone in the car with just their permit. He said they don’t get their licenses because of a combination of things.
“A lot of kids earn their half of credit in class. The handbook is a lot of reading and the kids don’t want to read. That stops a lot of them from getting their operator’s (license),” he said.
Williams said a recent survey showed 80 percent of test takers throughout Florida failed their learner’s permit test, and the ones who received their learner’s permit don’t go on to improve their skills.
“That’s because … they need a partnership between the school and their parent. They get drive time with me and they need to get drive time with their parents,” he said. “A lot of parents still don’t trust their kids to give them the extra time on the road so that way they don’t progress the way they need to progress.” The teens who drive without a license with no adult in the car should know the consequences for their actions. In Florida, the charge “No Valid Driver’s License” is classified as a second-degree misdemeanor, with penalties of up to 60 days in jail and a $500 fine.
The 17-year-old Lakewood girl who learned to drive when she was 10, said she was relieved when she finally got her license a few months ago. She knew that if she ever got into an accident, her parents would make her pay.
“Whenever a cop drove by, I would freak out,” she said.
- SNN Staff Writers Kenya Howard, Myesha Hall, Bianca Collins and
Rachel Gadoury contributed to this story.
Copyright © 2002-2020 Blackboard, Inc. All rights reserved.