Sophomore Matthew Sala works on his bug-bot in Jason Ness’ robotics class. Students used metal kits, 3D printers and computers toprogram their robots. (JORDEN POMPEY | SNN)
BY DEONNIE J. BROWN
SNN Staff Writer
In robotics teacher Jason Ness’ classroom, students guide “bug-bots” over a seesaw-type obstacle to get onto a course. The bug-bots - mechanically built robots programmed to navigate an obstacle course – make their way past a series of other objects, including wood planks, jump ropes, cartons of sand and a hill.
“I love this project because it lets everyone choose their own way. It’s up to you to choose how your robot is going to be,” sophomore Sierra Mieczkowski said. In the spring, Ness’ students built the bug-bots using advanced robotics methods.
“They are programmed to do autonomous navigation, they look with a Sonar Rangefinder and choose the path that’s most open to avoid obstacles,” Ness said. Students used metal kits to create the bug-bots, and if they needed a specialized part for the robot, they used the 3D printer, Mieczkowski said.
Students had a choice to create their bug-bot with as many legs as they want.
“We built a six-legged bug-bot to show middle school students and then went from eight to 10 and 12. Some even have two legs,” Ness said.
The robots competed in the Bug-Bots Olympics to see which bug-bot performed best. The event went from Feb.
29-March 4.
“We’ve only done two builds so far this year, and I think they have turned out pretty well. If we build a robot and it turns out well then we may have a chance of winning,” sophomore Matthew Sala said before the
Olympics.
In the end, period four winners were Sala, Anthony Gruber, Mark Ralston and Ashley Renwick. Period three winners were Anthony Robinson, Raymond Wong, Piper Babka, Andy Dzanic and Sunny Parvataneni.
Ness said creating bug-bots allows the students to stretch their abilities and knowledge.
“This is a much more challenging mechanical build. It forces them to go beyond the traditional and aligns with the motion unit we are teaching,” Ness said. 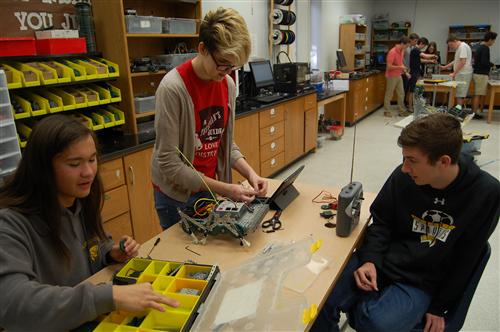 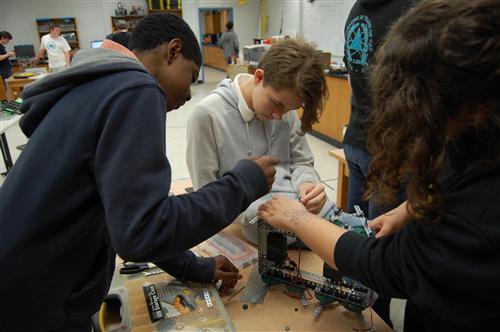 (JORDEN POMPEY | SNN)
Sophomores Liam Moffit, Johnathan Yearwood and Sierra Mieczkowski work together on their bug-bot. “I love this
project because it lets everyone choose their own way,” Mieczkowski said. “It’s up to you to choose how your robot is
going to be.” 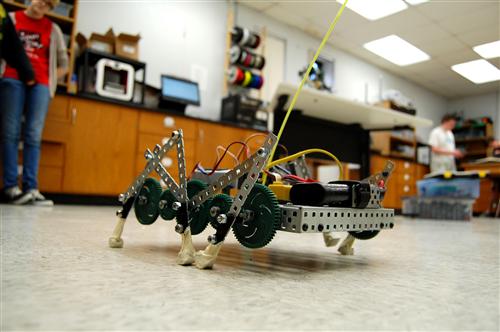 Students test their new bug-bot in Ness’ class to see if it works properly before they compete.
Copyright © 2002-2021 Blackboard, Inc. All rights reserved.