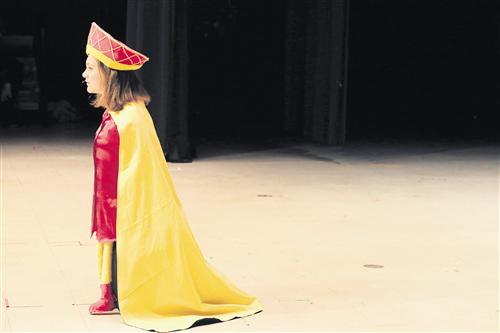 (SOPHIE OJDANIC | SNN)
Freshman Emily Flake stands on stage for a scene as Lord Farquaad in Shrek the Musical on April 23.
BY MAYANA APPEL AND SYDNEY MOORE
SNN Staff Writers
Lakewood High School’s production of the famous show Shrek: The Musical had viewers laughing, dancing, and even finding themselves feeling sorry for a loudmouth mean and green ogre.
In the end, the Spartan drama team managed to put on a great show, but not without a few glitches.
The opening scene began with the stars of the show, seniors Danny McSorley as Shrek and Alyssa Dodge as Fiona, giving the audience a little backstory of their characters.
Less than three minutes in, and the audience was already chuckling at the sarcastic and playfully rude humor that McSorley brought to the stage as Shrek. As the show went on, it seemed McSorley was made for the part, bringing the character alive in his own style.
Donkey, played by freshman Taylor Ortego, and freshman Emily Flake as Farquaad also added their own twists to usual male roles. In Flake’s performance of What’s up Duloc, it seemed her soft soprano voice got a little too quiet for the audience to hear over the live orchestra.
That wasn’t the only time the audience strained to hear due to overpowering music or microphone problems. At the very end of the show, Dodge’s microphone completely gave out, leaving her part in a duet with McSorley unheard.
Apart from the minor difficulties from the technical side of the show, the talent was nothing but extraordinary. A few of the characters shined in the spotlight. Shrek, Fiona and Donkey did exceptionally well during their performance. They projected well and their acting was very vivid, and it was easy to see why they were chosen to be the stars of the musical.
Dodge, McSorley and Ortego were excellent leads. All of them fit their roles perfectly.
Dodge’s singing and dancing abilities were also brought into the light, in the very witty song Morning Person. Dodge had the perfect voice for Fiona, she was loud enough to be heard and she had the passion that was needed for this character. The emotions that a princess should have after being locked in a tower for 20 years were captured just right in her performance.
The only person who could have really played Shrek was McSorley. His singing was beautiful and it was clear that he would be the star of the play if they casted him as Shrek. We had no doubt that he would deliver an amazing performance, and he did.
Ortego had the enthusiasm of Donkey and did everything perfectly. She knew what she was doing and it showed. She was hyper and moved around the stage like she had a purpose - as Donkey does in all the movies and the actual musical.
Flake gave a powerful voice to the character Dragon with an excellent performance of the show, Forever. The audience also received a special treat when freshman Julia Bernhart came onstage to show off her impressive tap dancing skills.
From freshmen to seniors, football players and even the CAT valedictorian, all were a part of the talented cast, assisted by music director Jacob Merrett and director Lakewood alumnus Kelsey Hill. They spent countless hours with the cast, making sure we as the audience had a great experience watching the show.
We know we did. (SOPHIE OJDANIC | SNN)
Senior Danny McSorley sings during Shrek the Musical on April 23 in the Lakewood auditorium. "(Shrek is) very similar to me. (He's) sarcastic, rude, a fun character but he’s a good guy in the end so he’s all right," he said. (SOPHIE OJDANIC | SNN)
Freshman Taylor Ortego and senior Alyssa Dodge put on makeup before the April 23 performance. Ortego played Donkey and Dodge played Fiona in the musical. Ortego's favorite part was "being with everyone. Everyone on the cast is incredible, they’re all really nice so I like working with the people," Ortego said. 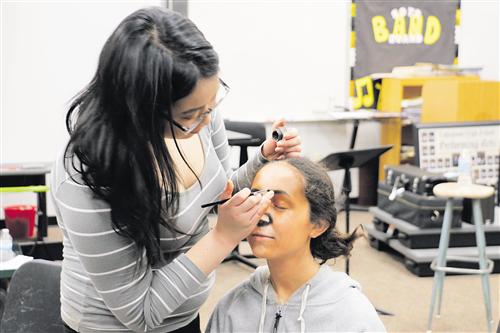 (SOPHIE OJDANIC | SNN)
Senior Lyxa Dieu does Taylor Ortego’s makeup before Shrek the Musical on April 23. Dieu was the make-up artist for the cast.
Copyright © 2002-2020 Blackboard, Inc. All rights reserved.