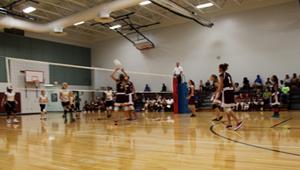 No.7 Kelly Hannigan jumps to return a shot in Monday's victory over Baypoint. The Lady Trojans are 4-0 this season.

The John Hopkins Middle School volleyball teams swept Baypoint Middle School Monday night. Both the girls' and boys' teams kept the winning spirit running. The teams are doing great for an early start, with the boys reaching .500 at 2-2, and the girls winning all four of their games. Together, they're giving the school plenty of reasons to cheer for the team.

Katie Truong for the girls and Larry James for the boys were the key players who led the Trojans.

The next game is Wednesday, at home against Tyrone. “We had great crowd support yesterday and are hoping for the same showing tomorrow,” said coach Glessner after the game.