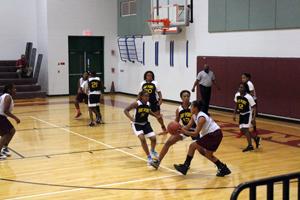 The JHMS boys' team didn't do as well. Playing on the road against Bay Point, the boys dropped their first game of the season, 32-20. Jahlon Holland and Rafael Tabera led the boys team.

Both teams are in action again on Monday, Dec. 16. The boys are at home against Tyrone Middle, while the girls play on the road. The games start at 4:30.