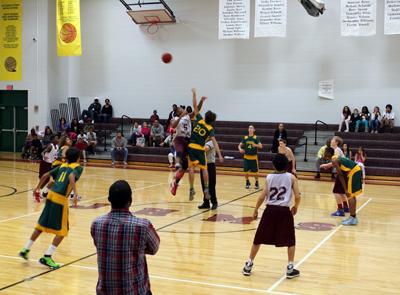 Eighth-grader Jahlon Holland goes up for ball during Monday's game. The Trojans are now 3-1 in the season.

The boys struggled through the first half of their game. But in the second half, they came back strong against the Hawks and won 44-30. Leading the boys in scoring was seventh-grader Robert Dudley.

Playing on the road, the Lady Trojans started strong and finished strong, winning their game 39-13. Eighth-grader Paris Williams led the scoring for JHMS with 13 points.

The victories put the girls team at 4-0, and the boys at 3-1. Both teams are in action Wednesday, Dec. 18. In the last game before winter break, the boys are at home against Azalea, while the girls play Azalea on the road. Tip off is at 4:30.