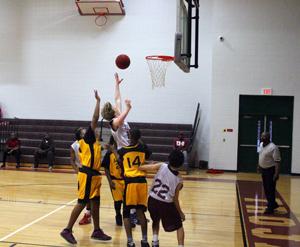 Eighth-grader Griffin O'Neil goes for the shot in Wednesday's game against the Azalea Black Knights.

It was the perfect way to close out the first half of the season.

In the final basketball contests of the year, the JHMS boys and girls teams defeated teams from Azalea Middle School on Wednesday, Dec. 18. It was the second time this season that both JHMS teams scored victories over the Black Knights.

The boys played at home and started off a little shaky. But the Trojans finished strong, with a final score of 24-21. Forward Griffin O'Neil led the boys with 10 points. The team ended the first half of the season with a 4-1 record.

The girls played at Azalea, and once again, they started fast and finished even faster. The final score was 51-7, with point guard Paris Williams leading the Lady Trojans with 14 points. The Lady Trojans remain undefeated with a perfect 5-0 record.

The JHop basketball teams resume South District play on Thursday, January, 9 when they take on Meadowlawn. The girls will be at home, and the boys will be on the road. Tip-off is at 4:30.