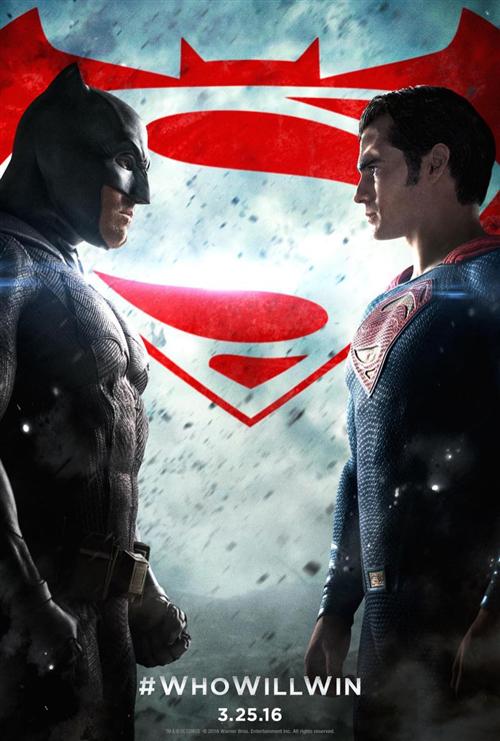 One of the most anticipated films of 2016 about two of the most iconic superheroes of all time battling each other has recently been unleashed into the world.

The question is: Does it live up to high expectations? Well… not really.

Is there still some fun to be had for fans of these characters that go into the film with low expectations? Absolutely.

Batman v Superman: Dawn of Justice is directed by Zack Snyder, who also directed this film’s predecessor, 2013’s Man of Steel, as well as the films 300 and Watchmen. Henry Cavill and Amy Adams reprise their roles as Superman and Lois Lane, and joining them this time around is none other than Ben Affleck as Bruce Wayne/Batman, Gal Gadot as Wonder Woman and Jesse Eisenberg as Lex Luthor.

The basic plot of the film is that in the aftermath of the destructive and chaotic Man of Steel finale, you know, the one where Superman and General Zod battled in the city of Metropolis and thousands of human lives were lost, people either consider Superman a heroic god or a threat to all life on Earth. An older, less forgiving Bruce Wayne, who experienced the death and destruction firsthand, is on the side of Superman being a threat - so much so that he wants to take him out.

Superman also doesn’t like Batman because he doesn’t like masked vigilantes… I guess. Anyway, this causes the two to clash.

In the meantime, Lex Luthor is doing some shady things involving Kryptonian technology that he might just want to use against Superman. If you couldn’t tell already from the Dawn of Justice part of the title, this movie is also meant to partly set up the future Justice League films.

First, I’d like to mention that I am a fan of Snyder’s, especially because of Watchmen, and I do believe that a lot of this film’s flaws should not be pinned entirely on him.  He knows how to set up shots beautifully and he has a certain attention to detail that he doesn’t get credit for most of the time. He also knows his way around big-budget, CGI, action-spectacle films.

The thing is that he has a problem with storytelling and narrative flow in almost every movie he directs, and that is no different with this movie. This also may be due to the film’s script written by Chris Terrio and David S. Goyer, whose past works include Affleck’s own Oscar-winner Argo and Christopher Nolan’s amazing Dark Knight trilogy, which is slightly surprising considering their talent. All I know is that it did not come together smoothly in the editing room.

When I saw Watchmen I instantly knew that Snyder could make a good big screen representation of Batman. And not surprisingly, the Batman areas of the film are pretty much the best. It’s clear that Snyder had a lot of inspiration from Frank Miller’s Batman: The Dark Knight Returns, and any fan of that book will be able to pick out the obvious connections and homages.

This movie has little things that maybe some audiences will overlook, but completely insults the intelligence of comic and movie nerds like myself - little things like the LexCorp computer files containing the surveillance footage on the future Justice League members (Wonder Woman, The Flash, Aquaman, and Cyborg) having their LITERAL LOGOS on the front of them! Why? Did someone at LexCorp sit there and design logos for these random superheroes and their files? That is just one example of the little bits of questionable material that this movie is plagued with.

Going into this movie audience members might think that they are about to watch Man of Steel 2. That is certainly not the case. The star of this film is Ben Affleck, and he did a great job being the Batman. Batman is arguably my favorite superhero/comic book character of all time, so I care about who portrays him. He had the look and the nice sense of intensity that audiences will enjoy. I also believe that this was definitely the best Batman hand-to-hand combat to ever hit the screen. See what I did there?

As for Cavill, he’s just okay as Superman. His portrayal hasn’t really elevated since Man of Steel. He does the job. The only thing that lets me embrace his Superman with open arms is the way Cavill speaks of his character in interviews. He seems like a well-spoken, intelligent person who knows exactly what he is talking about, thus making me feel comfortable with him.

As for anyone who had any fear of Gal Gadot’s Wonder Woman, allow me to put those to rest because she was awesome - when she finally suits up. We see her as just Diana Prince a couple times throughout the film and she seems like a decent addition, but it isn’t until she makes her entrance as Wonder Woman in the final act that we can get excited for her standalone film. Some members of the audience may even cheer when she shows up. Gadot brings this sense of fearlessness and experience to the character that does justice to DC fans. No pun intended.

Finally, I like Jesse Eisenberg as an actor, but he’s no Lex Luthor. He plays this obsessive and maniacal Luthor that feels more like Jim Carrey’s Riddler from 1995’s Batman Forever. I personally found him strangely entertaining in this over-the-top performance, but fans of Lex Luthor from comic books will be strongly disappointed.

One bright spot in this film was the score/soundtrack by legendary composer Hans Zimmer and multi-instrumentalist and composer Tom Holkenborg (aka Junkie XL). I’ve listened to the soundtrack multiple times now, and I can safely say that it captures the intensity, gravitas and flashiness of a film called Batman v Superman. Hans Zimmer has done incredible work in the past few decades, whether it be his Academy Award-winning score for The Lion King or his work on Nolan’s Dark Knight trilogy, and so it was not a surprise to find that this film’s score would be good.

But what really makes this score great is the little thrilling elements that Junkie XL brings to the table. One of those thrilling elements is the track Is She With You?, which comes in just as Wonder Woman does in the big showdown. I think that most would agree that this is the most memorable piece in the film.

Maybe this film was some sort of sign to not take superhero movies that seriously and just enjoy them for the moving graphic novels that they are. Marvel definitely has a tighter grip on its craft and is constantly innovating. If DC wants to catch up, they will have to bring us better films down the line. Only time can tell if Snyder can helm the DC Extended Universe properly. As for now we have a movie that is worth seeing in a theater at least once if you’re a DC fan. And of course I still anticipate Ben Affleck’s own Batman film and this summer’s Suicide Squad. I don’t usually give a rating/score in my reviews but I’d give this film 5 over-the-top Jesse Eisenbergs out of 10.