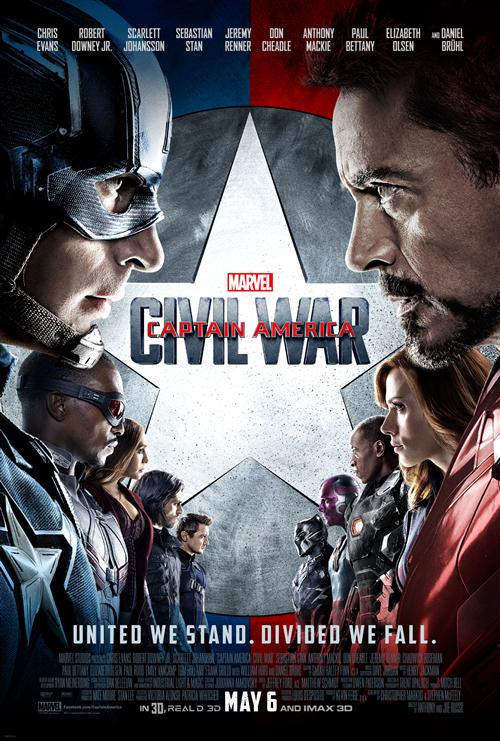 A few weeks post-Batman v Superman being released, we’re left wondering if superhero movies are over saturated and making us feel fatigued. Then here comes Marvel with open arms, ready to give you a warm and gentle hug. As you hug him, he whispers something in your ear.

“It’s all okay, son. Zack Snyder can’t hurt you anymore. I’ll always be here for you.”

Captain America: Civil War is directed by Joe and Anthony Russo and was written by Christopher Markus and Stephen McFeely. The film stars Chris Evans as Steve Rogers/Captain America and Robert Downey Jr. as Tony Stark/Iron Man alongside a large ensemble cast that’s just too much to list off right now.

First things first, I’m positive that this was the hands down best Captain America film. And the amazing thing is that it’s a really great Avengers movie as well. The Russo brothers, who directed this film’s predecessor Captain America: The Winter Soldier, continue the narrative from that film and perfectly balance that with the ongoing Avengers story.

This film not only completes a great Captain America trilogy, but it then propels us into the future of the Marvel Cinematic Universe at the same time. I have to give props to the writers because some might not realize that they wrote all three Cap films. And to be quite honest, they show in Civil War that they have the tightest grip on their narratives and character evolutions than anybody else who writes for the MCU.

There is really nothing I can say about the returning cast that hasn’t already been said. Everyone is their character, especially our leads. Chris Evans continues to be the sacrifice-making leader who fights for freedom and morality. Downey Jr. continues to play the role he was born to, but this time his witty remarks take a backseat to a serious and emotional performance.

If there was anything else I had to mention about a character who wasn’t a newcomer it would be that I liked Paul Rudd’s Ant-Man even more so in an Avengers setting. It’s not that I didn’t like him in his own flick from last year, it’s just that I found his short time and few pieces of dialogue in this film far funnier than anything we saw in that previous one. His little interplay with the other characters was nice and I thought his powers played well in the large-scale action. These big, Avengers team-up movies are where he belongs.

Speaking of newcomers, this film introduces us to Chadwick Boseman’s Black Panther and the new Spider-Man played by Tom Holland. Black Panther was a character I wasn’t entirely familiar with, but I thought the filmmakers incorporated him into this story very well.

Usually I would groan at the thought of yet another Peter Parker, but Holland nails it. Unlike the others who have played the character before, he presents the boyish charm of a young Peter Parker. This makes him stand out among the other Avengers and quite possibly brings us the best on-screen Spider-Man. I grew up on Sam Raimi’s Spidey movies and Tobey Maguire will always be a classic version of the web-slinger, but Holland just crushes it.

It’s also good to mention that the filmmakers don’t waste any time telling Parker’s origin once again. Everybody should know what bites Peter and what happens to Uncle Ben by now.

Now for my comic fans I have to say that this is very different from the Marvel Comics Civil War storyline, but that’s not a bad thing. Those who’ve read that would know that the story involves almost every Marvel character, something that can’t really happen due to some film properties owned by 20th Century Fox (X-Men and Fantastic Four). But there are some nods to the comic that diehard fans will pick up. Regardless, the film stands on its own as something that any follower of the MCU can enjoy.

One criticism I would have about this film is that it is a little slow in the first half because it is a series of conversation scenes and setting up the divide of our heroes with opposing views. Not that it isn’t well-acted and entertaining; it’s just a little redundant at times. But, oh boy, does it pay off in the second half.

One scene puts this film among the best of superhero movies: the airport battle scene. Our two teams clash physically in what is almost 20 minutes of awesomeness. From the perfect fighting match-ups to the humor and emotional dialogue, this scene is a comic nerd’s fantasy come to life. This is something that has to be seen in a theater, so do yourself a favor and do just that.

Call me a Marvel fanboy, I don’t care. I know a fun, well-made movie when I see one. This film feels like an unintentional slap in DC’s face. Not to be that guy who tells you Batman v Superman sucked, but Civil War is the far superior film.

But isn’t that crazy that I’m talking about both of these movies so close together in a period of time? We’re not even halfway through the year and, including X-Men: Apocalypse that’s being released at the end of this month, we’ve already got four giant, superhero blockbusters. Superhero fatigue is clearly starting to get to people.

It’s good that a movie like this was released though. It allows audiences to get excited again. It may not stop the over-saturation, but at least it throws something great into the mix. The Russo brothers topped themselves, and I can’t wait until we get to see where they take Infinity War. As for the near future, I’m pumped for next year’s Spider-Man: Homecoming; a movie that I hesitated from liking before seeing Civil War.