Fresh food that’s worth the price 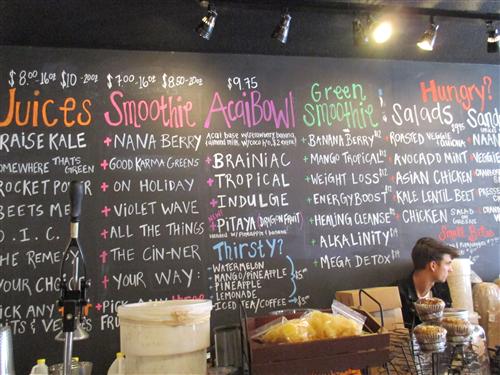 Karma’s menu is displayed on a blackboard behind the counter.(ALEXIS GARCIA | SNN)

BY ALEXIS GARCIA
SNN Staff Writer
The heaps of fresh fruit piled high to the left of the ordering counter immediately caught my eye, and the scents wafting from behind the counter were enough to make my stomach growl.
I stared at the menu on the huge blackboard that hangs behind the counter and was surprised because everything at this healthy restaurant sounded like it would taste delicious.
The Karma Juice Bar and Eatery is on 209 First St. NE in St. Petersburg. It is open Monday- Friday 8 a.m. to 6 p.m. and Saturday-Sunday 9 a.m. to 5 p.m.
I visited Karma twice. The first time I liked, and the second time – I liked even more.
The first day was on April 9, and I ordered an Indulge acai bowl ($9.75) with a watermelon drink ($5). My bill was roughly $15. All of the food and drinks are made to order and on Saturday it was busy, so the service was a little slower, but the wait was worth it.
Although, there are places inside where you can sit and eat, my friend and I sat outside at a red two-person table with an umbrella over it to shade guests from the sun. Each of the five outside tables had a plant on it. It was nice to sit in the breeze while we waited for our food.
Our drinks came out in about seven minutes, and when I saw my watermelon drink and my friends’ lemonade I was eager to try both, but I was disappointed in the size of the drink. The drink was relatively small and for $5 I was expecting something bigger.
My watermelon drink was a pink color that resembled the inside of the fruit. When I took a sip, it tasted just like I was taking a bite out of a ripe watermelon. It was ice cold and had the texture of a slushy.
The worker told my friend and me that the watermelon and lemonade were just squeezed fresh, so it might need sugar and that if we wanted to add some we could go inside and ask.
I tried the lemonade and was pleasantly surprised. It wasn’t like the lemonade I’ve had at places like Chipotle or Panera Bread because it wasn’t overly sweet. It was definitely fresh, and my friend and I were impressed with the taste.
Our acai Indulge bowls came out in about 15 minutes, so about eight minutes after we got our drinks. It was very appealing to look at. The bowl contains a smoothie mixture, granola, cacao nibs, local honey, strawberries and bananas.
The strawberries and bananas contrasted against the dark brown of the cacao nibs and after taking a few pictures I took a bite. The smoothie at the bottom was very cold, and overall it tasted good.
I liked the texture and crunch of the cacao nibs against everything else in the bowl. The rest of the bowl was soft because it’s blended fruit, granola and cut-up fruit.
I was expecting to be able to finish the bowl because it was mostly fruit, but it was actually very filling and my friend and I had to ask for to-go-bowls.
I also went on April 19 and ordered the Tropical acai bowl ($9.75) with the watermelon drink ($5) and my friend got the Tropical acai bowl with a strawberry and banana, or as the menu calls it, a Nanaberry smoothie ($7).
The service was great. They were empty, so the food came out in about five minutes. The smoothie took a little bit longer as it takes a while to blend.
Again, the worker told me that the watermelon was just squeezed fresh, so it might need sugar and that if I wanted to add some I could go inside and ask.
This time my experience was different because the watermelon drink was in a bigger cup and the smoothie was in a smaller cup that was the same size they gave me during my first visit.
There was also a difference in the taste. It was still a good drink that tasted like watermelon, but this time it didn’t have the same slushy-like quality that left you wanting more.
The Tropical acai bowl on the other hand was heaven. I couldn’t have been more impressed. I thought that the Indulge bowl was good but compared to the Tropical, it was just okay.
According to the menu, the bowl consists of a smoothie mixture, granola, pineapple, mango and shaved coconut, but when we got our bowls, we noticed that there was a little bit of banana in it as well and it was seriously fantastic.
The sweet of the banana contrasted against the tang of the pineapple and all of the fruits just complimented each other really well.
The granola and smoothie mixture makes the bowl filling, but this time we managed to power through our fullness and consumed the entire bowl in record time because it tasted so good.
Overall, my experience at the Karma Juice Bar and Eatery was great. The people were kind and the food tasted amazing. It was a little on the pricey side, but the quality of the food and drinks served were mouthwatering.
You can’t put a price on delicious.
Copyright © 2002-2021 Blackboard, Inc. All rights reserved.