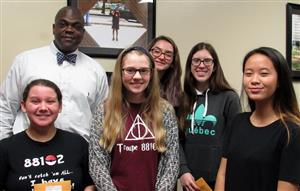 Principal Brown is honoring five J.Hop students for their ability to succeed in a specific subject area. The five eighth-graders received PRIDE awards for excelling in either math, science, social studies, writing, or world languages.

“I feel excited and happy to win the social studies award,” said Annika.

“I was totally surprised because math is tricky and confusing,” said Christina.

Along with having a 3.5 average in the subject area, eighth graders needed to be involved in a subject-related club and demonstrate good citizenship. Ajla Kuc, who won for writing and is the editor-in-chief of the J.Hop Times, noticed that all of this year’s winners were female.

“I’m not surprised because girls mature faster than boys,” she said.