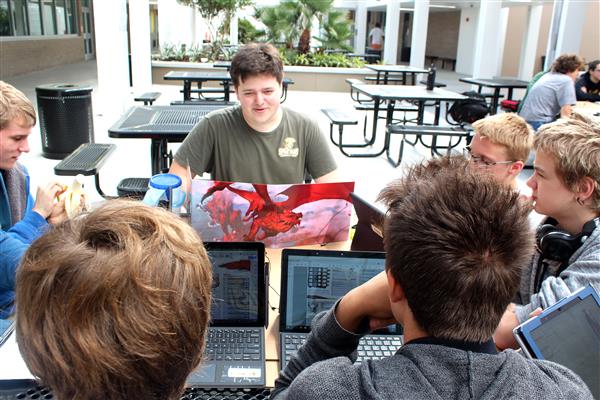 Junior Henry Haight leads a Dungeon & Dragons session on Feb. 12 in the courtyard in front of the
cafeteria. The new club meets Tuesdays from 1:50-4 p.m. (KA'WON REEDY | SNN)

New club in Lakewood gives students the opportunity to have adventures right in the school’s courtyard.

To those unaware of the game, a stroll through the courtyard in front of the cafeteria on a Tuesday afternoon may prove odd. Tables filled with students roleplaying their fictional characters while another student known as a “dungeon master” leads the adventurer’s story.

This is Dungeons & Dragons, a fairly new club that’s been attracting quite a bit of members, led by junior Darian Cahilig. The members meet on Tuesdays from 1:50-4 p.m.

Cahilig said his interest in Dungeons & Dragons started at around 6 years old.

“I was always one for storytelling,” Cahilig said. “You’d assume that the story can’t be told by a player, but it can. The dungeon master creates the world, you both have to control the story.”

Cahilig started the club in October, and it is sponsored by music instructor Jacob Merrett. A total of 22 members have joined since.

Junior Henry Haight is the vice president of the Dungeons & Dragons club. He has the position of dungeon master, telling the story and managing the game for the players who control their characters and choose how to manipulate their environment.

“I run the game,” Haight said. “I control the NPC’s (non-playable characters), the enemies, the events and so forth.”

Senior Seannace Wilkins is also a dungeon master in the club. Players in the club have the option of reviewing the Dungeons & Dragons handbook although it’s possible to get by without it. The first step in creating a character for the game is to pick a race, for example, a dwarf, human or elf, and a class such as a fighter, priest or sorcerer.

It is easier to play a character in Dungeons & Dragons than to play the dungeon master. Although there is some prep work when creating a character, the process is fairly simple if you follow the handbook correctly. Any time you take an action, you will generally need to roll the dice, the dungeon master decides which number or range of numbers causes which outcome.

If the game sounds interesting but you don’t want to join the club, there are still ways to get the experience. Online alternatives like ddo.com connect you with players from around the world.

Overall, the game may seem confusing or strange.

“Dungeons and Dragons is a very unique and creative experience,” Haight said. “It allows you to tell collaborative stories in a way that no other game lets you do.”

If you’re at all interested in joining the club, they are still taking members. Just speak with the president or vice president.