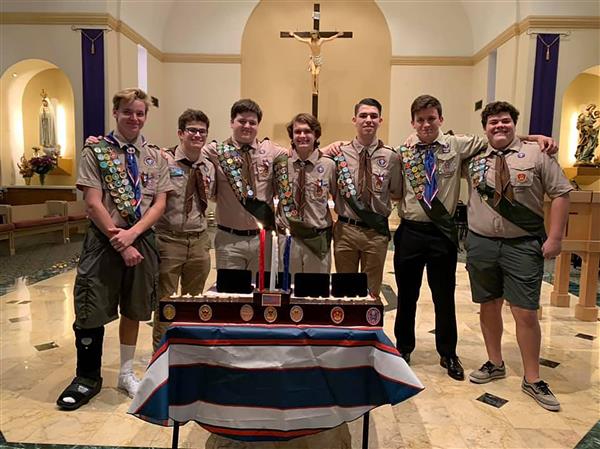 From left, Scouts Wyatt Dano, Joseph Caruso, Henry Haight, Donald Spurlock, Aidan Cody, Wesley Hudson and Jacob Loney stand together in front of the ceremonial candle holder at St. Paul’s Catholic Church after the Eagle Scout induction ceremony. (Ernest Houston is not pictured because he is in another troop.) (SPECIAL TO SNN)

“It’s something I’ve been doing for a while with my friends. It’s an awesome accomplishment, and it’s satisfying to know I finished it,” Hudson said.

To reach the rank of Eagle, a Scout must earn 21 merit badges alongside organizing and leading your troop in a service project. For his, Hudson renovated a grill at his church. Haight did some landscaping in front of the Police Athletic League in Woodlawn and constructed a Little Library, Caruso constructed and installed a fitness center at his church, and Houston built trash and recycling bins for Boyd Hill.

Haight, Hudson and Caruso belong to Troop 209 out of St. Paul’s Catholic School. Houston belongs to Troop 263 based out of Holy Family.
Each Scout has his own reason for sticking with the troop to the finale.

“I started at a young age. The people I looked up to were in it,” Houston said. “Volunteering is a big thing, helping younger people and being a role model.”

Once a Scout reaches Eagle, however, his time in the organization is done.

“I’ve been in the Scouts for as long as I can remember, really. It’s honestly bittersweet to finally finish up everything and reach Eagle,” Haight said, reflecting on his time in the Scouts. “It’s great to have it done, sure, but that also means it’s over.”